“I Had No Idea What to Expect:” A Day in the Life of A Sixth Grader 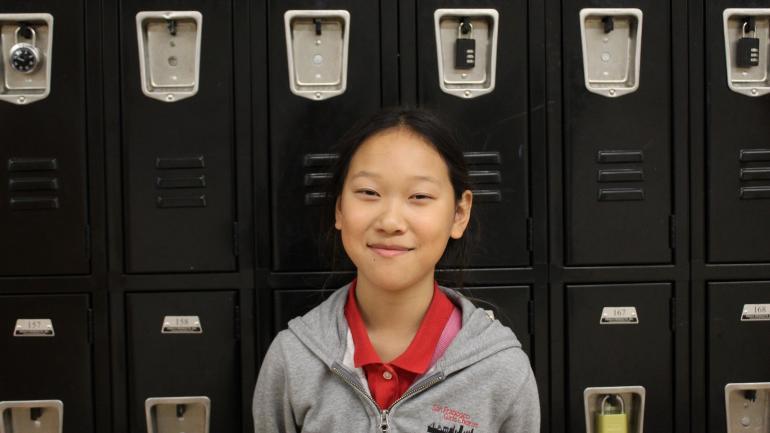 Change can be tough! No matter how long it’s been, most of us can remember all too well that one of the thorniest transitions we face as adolescents is the move from elementary school to middle school. The tougher academic load, more complex schedule, and learning a whole new world of pre-teen social mores can throw even the most confident student.

Aram K. is a new sixth grader at Gateway Middle, who comes to Gateway from McKinley Elementary School, where she discovered a love for swimming, soccer, and song. She regularly performs with the San Francisco Girls Chorus and SF Opera, where she can be seen in a forthcoming production of Hansel and Gretel. When she grows up, she hopes to be the scientist who discovers a cure for diabetes. We sat down with Aram to hear her firsthand account of navigating the sixth grade.

Editor’s note: While the interview has been lightly edited for length and clarity, this feature does reflect Aram in her own — admittedly very precocious — words. She comments on many aspects of the sixth grade experience that are universal, but like many Gateway students, Aram is far from your “average” middle schooler. Enjoy!

How did you feel about the first day of middle school? What was it like?

I was nervous because I would be meeting new people and I had no idea what to expect. And at first it was a little stressful -- we switched seats a lot on the first day and the teachers had a lot of directions for us to follow. We even had our first test that week, which I really didn’t expect!

What has your experience been getting to know other students?

You could say I was a bit shy at first. I’m not one of those people who goes up to someone and says “Hi!” I usually hang out in the back and stay out of the light and try not to get in trouble. People think I wouldn’t be shy because I perform a lot, but I’ve known most of the people in rehearsals for at least three years. This was a new school, new people, a completely new setting for me.

But I’ve changed a lot. Now I’m raising my hand for every question, and I have a lot of friends. I realized I like helping people, whereas two months ago I was in the back hoping I wouldn’t get picked and wondering if I could find even one friend. But my first table partner became my first friend! Her name is Mesa, she is really nice even though I like to steal her lunch box. *laughs* I think I feel more confident and happy because everyone here is someone you can trust.

How are you adjusting to the new schedule and environment?

At first I was pretty overwhelmed since there are so many students crammed into the hallway between classes. I had to rely on my friends who were better at memorizing than me and follow them everywhere. But it’s started coming more naturally, and every now and then I check my schedule before school on my phone now. And I’m getting pretty good at getting a head start on my homework and keeping my own schedule for that.

I’m a big fan! I was already excited to meet some of them because a 7th grader I know told me about how nice they were. They’re all really nice, they always make sure they say “hi” to you personally at some point each class. I can’t say I have a favorite because all the sixth grade teachers are great. And I like that we get to go to different teachers’ classrooms instead of staying in one room like you do in elementary — I feel like you get to know their personalities better. And it means you can celebrate all of their birthdays, like we just did for Ms. Heckman.

What would you tell someone in fifth grade right now about what to expect?

Expect much more homework; last year we only had two pages a night on average, but now I have homework for every class, including co-curriculars. At first it can be overwhelming but after two months I’m used to it. You should start with the hardest thing and then work through the easier assignments and it’s not so bad. I would also say the teachers are great, so you should enjoy them while you have them, because you only get a year before you go up a grade. You can visit them but it isn't the same, so you should get to know them and help them after class. And don’t be rude.

What are your goals for the school year?

By the end of the sixth grade, I want to get all “fours” in all my classes, read 300 — no actually, 500 books by the end of the year, build better relationships with my teachers and friends, try not to get hit in the head by a basketball (which has happened to me before), and run a nine-minute mile in PE class — 9:48 is my record right now.

Wow, that is an ambitious year! We’ll catch up with Aram in June to see how her goals have progressed and hear her reflections on her sixth grade experience.