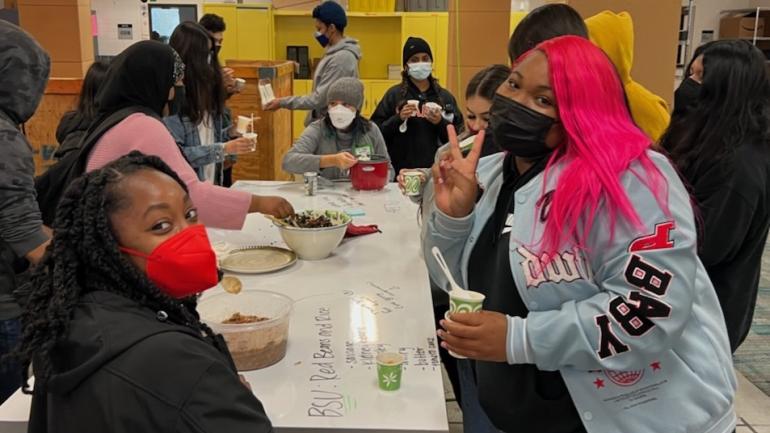 “Nothing you do in the classroom is as important as doing the introspective work of asking yourself how you, as a teacher, are being anti-racist, or how you may be perpetuating violence in your classroom,” said GHS Humanities Teacher and Equity Coalition member Lawrenzo Howell. “It’s uncomfortable, but that’s how you transform education. That is the work of education.”

That’s the spirit animating GHS’ Equity Coalition, a recently-formed council of educator-leaders with a variety of perspectives and areas of expertise, committed to leveling up Gateway’s anti-racist policies and practices and making the school community more just for students and staff alike.

“What’s really exciting about the Equity Coalition is that we’ve always believed equity work needs to be led by people of color and driven by the entire community, but that’s not always how it turns out. Usually a couple of people are expected to be the experts, and without a real coalition of BIPOC and white leaders, nothing changes,” said GHS Co-Principal and Equity Coalition Leader Stephanie Khaziran. “Even though this group is still kind of new, we’re already seeing so much impact already, so many ways of trying new things, and just starting things that we’ve been talking about wanting to do for a long time.”

The Equity Coalition is an outgrowth of smaller racial justice groups that have been longtime fixtures at Gateway: first a BIPOC staff affinity group that waxed and waned over time before becoming seriously revitalized during distance learning, then the White Anti-Racist Teachers (WART) group that has been meeting at GHS for over five years, and most recently the committee that was formed to develop new Ethnic Studies curriculum for ninth graders. While each of these groups continued to make progress on their own independent initiatives, it became clear that a council with representatives from all of the working groups would be the best way to prioritize and implement school-wide changes.

“The PD in particular is such a big step,” said Leah Ragen, a Humanities teacher who represents WART on the Equity Coalition. “WART is an important space but it’s an optional space, whereas when we have intentionally structured affinity spaces that everyone is required to be a part of, then everyone has to sit with what they are doing every day and how that could be affecting students. It’s especially important for us as white teachers to confront our own white fragility and do that work.”

On the student side of the Equity Coalition’s efforts, students and teachers have come together to form White Students Stepping Up (WSSUP) for Racial Justice, the first student group of its kind. As part of the larger mission to create and amplify BIPOC student joy, student affinity groups like the Black Student Union, Latinx Student Union and Asian American/ Pacific Islander Student Union co-sponsored a celebration in which students were encouraged to bring a rice-based dish with cultural significance to them to share and sample others. Students were able to experience firsthand the incredible diversity of approaches cultures from around the world bring to the humble rice grain, a culinary thread that connects people across continents.

“So often, when we do acknowledge students’ cultural or racial identities, it’s in the context of learning about genocide or some other terrible generational trauma,” said Stephanie. “In that context, emphasizing our students’ joy and the beauty that is in each of them can be very powerful.”

The Equity Coalition is already looking forward and working towards a full slate of activities in the coming school year; due to the all-hands-on-deck nature of returning to campus after more than a year of distance learning, many of this year’s projects didn’t get started until after winter break. Being able to hit the ground running in the fall means being able to plan more events for students and extend professional learning opportunities for teachers, with more time for faculty to develop trust with one another as they seek feedback around topics that can be challenging or uncomfortable.

“Taking this time to for the whole faculty to focus on anti-racist work like this positions (anti-racism) as something that’s important for us, that’s it’s not just a mission statement,” said Lawrenzo. “We value it so much that even though it’s hard, it’s uncomfortable, and you’re going to be pushed and challenged. But it’s something that really matters, because we all have skin in the game now.”