SASHA's Student Leaders are Building a Safe Future for Everyone 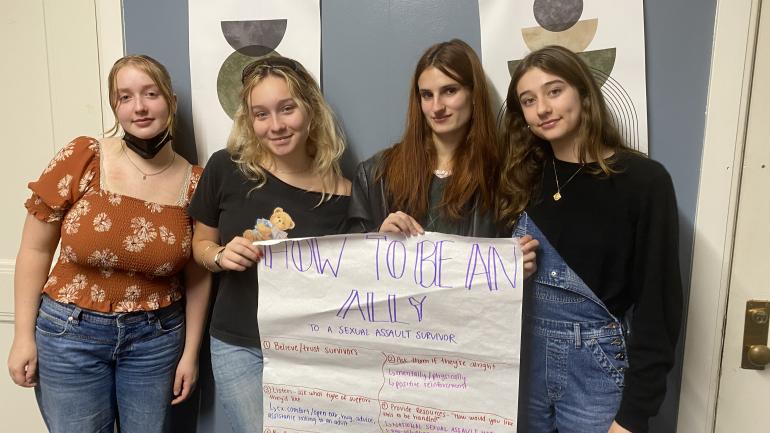 When students returned to campus last fall after almost two years of distance learning, they were of course excited to reconnect with classmates and start socializing again. But that time away had also given students like Hannah and many of her peers in the Class of 2023 some valuable perspective about what they wanted the rest of their high school experience to look like – and what they wouldn’t be tolerating any more.

“We’d all been at home for over a year, and I think a lot of us got comfortable because it meant you were dealing with so much less sexism or sexual harassment,” she said. “When we came back, it felt like a lot of us just weren’t going to accept that any more.”

That sentiment was echoed by high school students across the Bay Area and indeed the nation, as over the past year thousands of teenagers across America organized and attended protests aimed at ending rape culture, sexual harassment and sexual assault. GHS students Esther, Sadie, Carol, Cece and Hannah organized their own protest in which over 200 students marched peacefully to the plaza in Japantown and spoke about their own experiences and the need for both new policies to address student sexual harassment and assault as well as a cultural shift.

“It was like we were finally getting back together as a community,” Esther said of the experience. “I felt so connected to my peers as we came together to denounce this culture together all at once.”

After their march, the group became an official school club known as Students Against Sexual Harassment and Assault (SASHA). Though their members are still fairly few in number, their impact on the campus has been substantial. Working with community groups like Young Asian Women Against Violence, SASHA members have been trained in skills like recognizing patterns of abuse, supporting survivors, and knowing rights and laws related to sexual harassment and assault. In turn, they work to educate their peers and establish a safe space for students in need of support or who may have questions about these topics. They present to ninth graders about consent and allyship, and even at faculty meetings with ideas about how staff can better support students and create a positive, respectful learning environment.

“When you talk to other people at school and help them feel supported, that's huge,” said Hannah. “SASHA also makes me feel safer at school, and more comfortable on campus. I  feel like I've learned about how to be a leader of others, and I’m more comfortable being there for other people.”

This year, SASHA is focused on growing its membership and becoming a more diverse group in terms of both race and gender – which will be crucial to the group’s longevity as most members are seniors preparing for college.

“There’s definitely still some stigma around these topics or joining a group like ours, but I also have seen more and more guys who are interested in allyship and curious about talking to us,” said CeCe. “We just have to keep focusing on outreach and on being there for students who need us.”

Wondering how you can help address sexual harassment and support those affected? Check out these great tips from SASHA: